Today, Manor Baptist Church is still standing strong for the Lord and laboring to reach the San Leandro area with the Gospel of Christ.  Our current Pastor, Joe Carruthers, was called by the church in March of 2004, and is today following in the footsteps of the God-called men who have gone before him, guiding our church to the honor and glory of the Lord as we seek to reach the world around us with the message of God's grace.

As to what lies ahead for us in this life, only our Father in Heaven knows for certain.  We are confident that one day the glorious trumpet sound will fill the heavens, and Jesus will come for His Church exactly as He promised.  But until that happens, we here at Manor Baptist Church will keep on making our own history, and keep on faithfully preaching Christ by the Bay.

The year was 1953 when a small group of believers organized a new Baptist church in the Washington Manor neighborhood of San Leandro.  Under the leadership of Rev. Joe Sneed, they began meeting in a private home.  On October 25, 1953, seven charter members came forward and signed the roll book while singing "I'll Go Where You Want Me To Go."  The First Baptist Church of Washington Manor had come into being, and began seeking to reach the community with the Gospel.

This is one of the original invitation cards which were distributed in 1953...and the only photograph we possess of our church's very first Pastor.

The 1970's also saw the creation of Manor Baptist School, an institution which eventually grew to include preschool through senior high, with students on two campuses.  Pastor Roades retired in 1986, and was succeeded in the pulpit by Mark Shore (1986-88), Eugene Petersen (1988-93), and David Hagey (1993-2003), each of whom continued to lead the combined church and school ministries. However, declining enrollment and rising costs eventually led to the closing of the school in 1994. 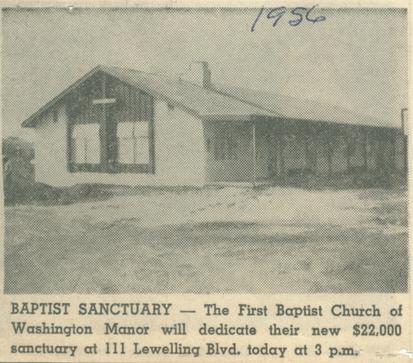 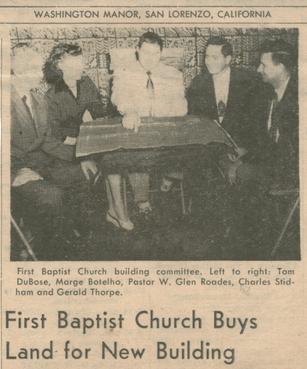 The ending of the school ministry ushered in a difficult period in our church's history, as a number of families left the ministry to join other churches in the area.  But the believers who stayed were a strong and faithful group who remained committed to the original vision of a local church reaching its community with the Gospel of Jesus Christ.  Under Brother Hagey's leadership, they kept at the work of the ministry and made sure the church's beacon never dimmed.  Pastor Hagey tendered his resignation in September of 2003. 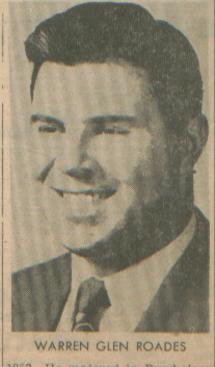 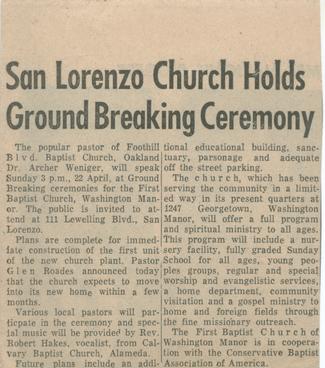 In 1959, the church officially changed its name from the First Baptist Church of Washington Manor to the name we use today, Manor Baptist Church.  And in 1971, the church became fully independent, withdrawing from the Conservative Baptist Association of which it had been a part. 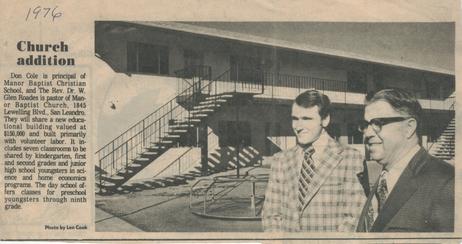 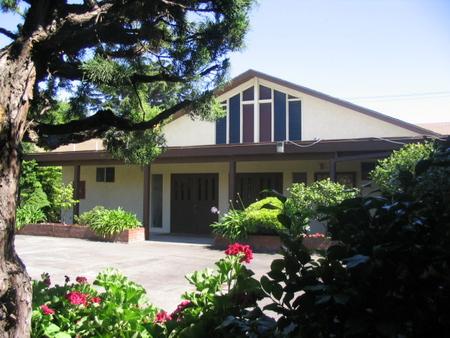 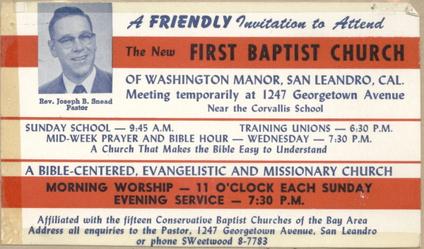 The land upon which our present-day buildings stand was purchased in 1955, and construction was begun immediately.  Over the next two decades, the structures which now house our church and ministries were completed. Those buildings were needed because the church was growing in numbers and expanding in outreach as the community around it grew in population.

Serious illness forced Brother Sneed to step down as Pastor before the church was a year old.  Such a change so early in its life might have threatened the infant church.  But God had His hand on the ministry, and had already prepared a young seminarian named Warren Glen Roades to take over the pulpit.  The strong and steady leadership of Brother Roades was to guide the church through 32 years of growth.